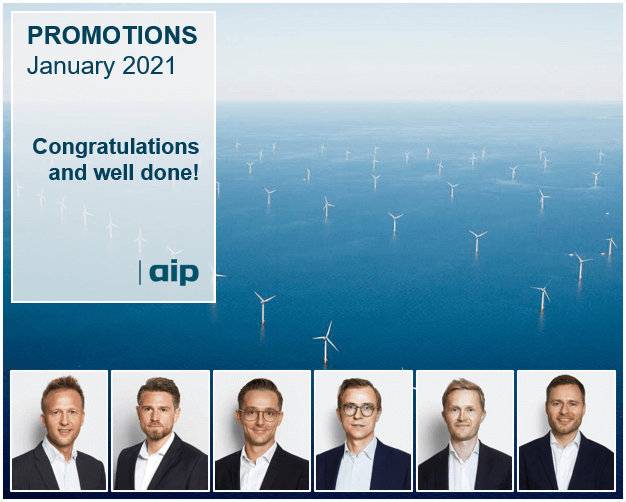 David Jensen aipmanagement.dk/team is promoted to Asset Director. David joined AIP in 2018 and has been instrumental in managing a number of key assets under construction in Europe and the US while also taking an active role in developing the asset management team.

Jannick Brøndum is Legal Director and General Counsel and is now heading the team responsible for legal and compliance. Jannick joined AIP in 2019 and has been imperative in structuring the new AIP funds, while overseeing the legal aspects of several landmark transactions closed in the past year.

Lasse Helstrup is promoted to Investment Director. Lasse has been with AIP since 2016 and has been focal in establishing and developing AIP’s presence in the US market. Since 2018, Lasse has led the teams completing three transactions within solar and onshore wind in California and Texas.

Mads Iversen is promoted to Investment Director. Mads joined AIP in 2019 and has led multiple large-scale transactions including Agility Trains East, being the latest addition to the AIP portfolio.

Martin Dalsager is promoted to Investment Director. Martin has been with AIP since 2015. Initially responsible for managing AIP’s growing portfolio of offshore wind assets, Martin also led the successful divestment of Butendiek in 2016. For the past two years, Martin has been responsible for sourcing and executing investments and was among other execution lead on the AIP’s latest onshore wind transaction in the US.

Michael Reding is promoted to Senior Risk Manager. Michael has been with AIP for two years during which he has further developed AIP’s approach to risk management and delivered on a broad scope of tasks related to portfolio financial analysis and reporting.

Congratulations to all and thank you for a strong contribution to AIP in 2020!

About AIP Management
AIP Management is a Danish investment company dedicated to investing into energy and infrastructure assets in Europe and the US. To date, AIP has invested more than EUR 4 billion, primarily in assets that contribute to the green transition, including six European offshore wind farms, three onshore wind farms in Sweden and the US, as well as in four large solar power plants in California and Texas. The existing investments deliver sustainable energy to cover the equivalent of 2.2 million households’ consumption and they save more than 3 million tonnes of CO2 on a yearly basis. For more information, please visit www.aipmanagement.dk